Book Review - Behind the Beautiful Forevers: Life, Death & Hope in a Mumbai Undercity by Katherine Boo 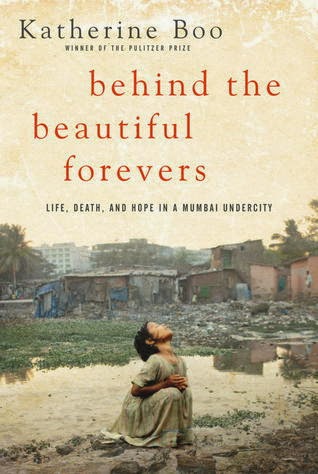 Katherine Boo, a journalist who won a Pulitzer for writing about poverty in the United States, fell in love with an Indian and moved to Mumbai.  She understood immediately that someone should bring the abject poverty of prosperous cities’ undercities to light; but being American, she felt unqualified.

But she decided to try nonetheless.  Three years, one interpreter, hundreds of interviews, and hours of footage later, she wrote this book.  Since Katherine Boo uses actual words and phrasings of the slum dwellers, the prose is simple -- while managing to be incredibly powerful.

It’s almost incomprehensible to me that the stories in the book actually happened -- and that similar horrific experiences are very likely being played out in different parts of the world even as I write this review.

Watching (from a virtual front seat) as the government exploits the poor, the poor exploit the poorer, and the poorer exploit the destitute -- all so that they will have money for food or urgent health care or basic education or to pay a bribe to free an unjustly accused family member from jail -- is both eye-opening and beyond heartbreaking.  Not to mention numerous untimely deaths that are a direct result of poor health and healthcare, abject poverty, and absolute desperation.

Moral absolutes, to me, have always seemed pretty much absolute.  But reading this book helped me (at least begin to) understand that if the high ground I have stood on all my life were to suddenly crumble beneath me -- and I had to decide between, say, saving my child’s life and doing something I have always considered reprehensible -- my moral absolutes might not be so absolute anymore.

Reading this book makes me want to take action, but I feel powerless and at a loss. The first step, though, is knowing -- so I guess I’ve taken that first step.

As Katherine Boo says in her Author’s Note (which is at the end of the book, but I strongly recommend reading it before the book itself):

"If the house is crooked and crumbling, and the land on
which it sits uneven, is it possible to make anything
lie straight?"

Overall, this book is unbelievably heartbreaking -- and it seems (contrary to the message in the title) that hope simply can’t be found in the lives of these people.  But I looked closely, and I found it. Not much, not often enough, but hope does exist.

That some people in Annawadi are able to use such a small amount of hope to sustain them is a testament to the human spirit.  And to the power of hope.

That people live in such conditions is a testament that all is most definitely not right -- or fair -- with the world.

From Pulitzer Prize-winner Katherine Boo, a landmark work of narrative nonfiction that tells the dramatic and sometimes heartbreaking story of families striving toward a better life in one of the twenty-first century’s great, unequal cities.

In this brilliantly written, fast-paced book, based on three years of uncompromising reporting, a bewildering age of global change and inequality is made human.

Annawadi is a makeshift settlement in the shadow of luxury hotels near the Mumbai airport, and as India starts to prosper, Annawadians are electric with hope. Abdul, a reflective and enterprising Muslim teenager, sees “a fortune beyond counting“ in the recyclable garbage that richer people throw away. Asha, a woman of formidable wit and deep scars from a childhood in rural poverty, has identified an alternate route to the middle class: political corruption. With a little luck, her sensitive, beautiful daughter—Annawadi’s “most-everything girl“—will soon become its first female college graduate. And even the poorest Annawadians, like Kalu, a fifteen-year-old scrap-metal thief, believe themselves inching closer to the good lives and good times they call “the full enjoy.”

But then Abdul the garbage sorter is falsely accused in a shocking tragedy; terror and a global recession rock the city; and suppressed tensions over religion, caste, sex, power and economic envy turn brutal. As the tenderest individual hopes intersect with the greatest global truths, the true contours of a competitive age are revealed. And so, too, are the imaginations and courage of the people of Annawadi.

With intelligence, humor, and deep insight into what connects human beings to one another in an era of tumultuous change, Behind the Beautiful Forevers carries the reader headlong into one of the twenty-first century’s hidden worlds, and into the lives of people impossible to forget.
Posted by Susie Boyce at 10:37 AM