Getting to the other side of impossible


To my husband, Jeff — the guy who makes everything possible.
DALLAS — At around midnight this past Christmas Eve, I walked into our freezing garage and found my husband, Jeff, sitting in the middle of a large box that had been opened wide on the floor like a giant book. He was reading an instruction manual, surrounded by literally hundreds of small screws, nuts, bolts, hinges and various other parts.
Santa had decided to give our kids a commercial-grade Ping-Pong table in hopes that it would last for more than a few years. What the sales associate hadn’t fully explained to Santa is that such tables require a minimum of two dozen bodybuilders to move, and a team of engineering graduate students to assemble.
Jeff and my teenage son — neither of whom will ever be (or even remotely resemble) bodybuilders — had already practically died hauling the bulkiest table parts upstairs to our game room. Feeling a little guilty about ruining my son’s back, Jeff — a business school graduate — had decided to send him off to bed and tackle the assembly alone.
From where I stood, Jeff was delusional; the undertaking was impossible. So I offered him an out: Santa could write an apology letter stating that his elves simply didn’t have time to assemble their new Ping-Pong table, and that he’s very sorry and hopes they understand and thanks for the yummy cookies.
Jeff declined, one hand holding the instruction manual, the other sorting through a mountain of parts. When I checked on him two hours later, Jeff was far — and I mean super, super far — from being finished. Gently, I reminded him that Santa’s apology letter was still an option. Perhaps a little less gently, he again declined.
Jeff shrugged and said, "When you eliminate the impossible from the equation, just about anything becomes possible." ... That got me thinking about Jeff, our marriage, life — and what's truly possible.
I looked into Jeff’s tired, bloodshot eyes the next morning, seriously concerned about how the Ping-Pong table had fared. He saved me from having to ask by mumbling, “It’s done. I got to bed around 6.”
I stared, slack-jawed. My faith in Jeff is reasonably high, sure, but tackling that Ping-Pong table job had seemed beyond crazy — and in my experience, faith doesn’t generally compensate for crazy. Jeff shrugged and said, “When you eliminate the impossible from the equation, just about anything becomes possible.”
After our day of fun, food and Ping-Pong playing had ended (Jeff’s day ended a good deal earlier than the rest of ours, oddly), Jeff’s statement about eliminating the impossible came back to me.
That got me thinking about Jeff, our marriage, life — and what’s truly possible.
Approximately two days after returning from our honeymoon just over 20 years ago, Jeff and I were both a bit shocked to realize that the honeymoon was indeed over. It became clear that we wouldn’t be finishing each other’s sentences — or sandwiches — anytime soon.
Small issues loomed large during the first few years. Like who emptied the trash and where dirty clothes belonged (in the hamper, I argued) and who paid the bills and what kind of milk to buy (skim is nothing more than colored water, he argued).
In fact, at times it seemed as if it would be impossible to live — for years on end — with a guy who could drive me crazy, and whose views on clutter and fat content differed so radically from mine. 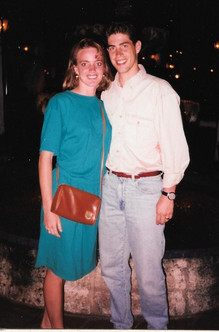 Susie and Jeff Boyce are shown on their honeymoon, a little more than 20 years ago. (Photo: Susie Boyce)
But giving up wasn’t an option. So we slowly learned to work through issues that truly needed solving, and tried — sometimes even successfully — not to waste mental energy on trivialities.
Once kids entered the equation, Jeff and I stepped into new and frightening areas of impossibilities. But since giving the kids away seems a bit extreme (until they turn 13), we are slowly working through the thousands of issues that need solving, trying not to waste mental energy on trivialities (like matching outfits, except for maybe on picture days).
As if raising kids wasn't impossible all on its own, we’ve experienced our share of rough: career setbacks, long-term injuries, hiccups in our marriage, and each of us losing a parent — to name a few. Oh, and raising kids (or did I already mention that?).
A few of these blows knocked us so far off our feet, in fact, that getting back up felt utterly impossible. But remarkably, that’s never once been the case. Outcomes have often differed from what we hoped for or anticipated, but there’s always been possible.
I’d like to think that I somehow contribute to our making it to the other side of impossible. I’ve come to recognize, however, that a major force behind such outcomes is my husband.
When dealing with a new crisis or heartache, my despair mode kicks into high gear. I panic a little (OK, a lot), imagine worst-case scenarios and throw around pointless questions like, “Why is life so hard?” Jeff responds by offering his shoulder, handing me tissues, agreeing that life can indeed suck — and then he gets to work demonstrating possible.
He reads instruction manuals, sorts through hundreds of solutions, prays, stays up all night, and never takes easy outs. In short, giving up is never an option — because Jeff has already eliminated the impossible.
I feel incredibly lucky to live — for years on end — with a guy who can still drive me crazy, and whose views on clutter and fat content still differ so radically from mine.
Because with Jeff in the equation, just about anything is possible.