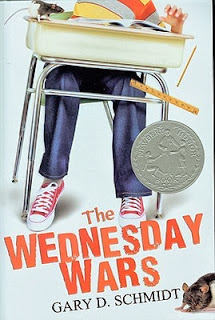 A friend of mine (who teaches middle school English -- bless her) recently alerted me to the author Gary Schmidt and his terrific novels.  In a fit of enthusiasm, I ordered four of his books (rash, I know) and read ‘The Wednesday Wars’ (Newberry Honor) first.

‘The Wednesday Wars’ has just about everything I love in a coming-of-age novel.  Hilarious in places, affecting and tender in others, with the requisite amount of learning and growing and “a-ha” moments experienced by Holling Hoodhood, the 7th grade protagonist.

I thoroughly enjoyed it.

Because the book is set in the late 1960’s (a time period I don’t often discuss around the dinner table with my kids), many of the political and cultural references won’t be familiar to them.  This may or may not affect whether they enjoy/understand it, so I’m thinking it might be great as a read-aloud (or audio) so that I could take a break when necessary to explain and discuss some of the issues (big ones – Vietnam War, Martin Luther King, Jr.).

On the other hand, since the book is written by a typical 7th grader – who worries just as much about the 8th graders yanking his shorts down during track practice as he does about the missing soldiers in Vietnam – the coming-of-age story probably speaks for itself, albeit on a different level to kids than it does to me.

Either way, I heartily recommend 'The Wednesday Wars.'

If this book is any indication, my book shelves have just received an upgrade.

(Next up: ‘Okay for Now’, then ‘Lizzie Bright and the Buckminster Boys,’ then ‘Trouble’).

In this Newbery Honor-winning novel, Gary D. Schmidt offers an unforgettable antihero. The Wednesday Wars is a wonderfully witty and compelling story about a teenage boy’s mishaps and adventures over the course of the 1967–68 school year in Long Island, New York.

Meet Holling Hoodhood, a seventh-grader at Camillo Junior High, who must spend Wednesday afternoons with his teacher, Mrs. Baker, while the rest of the class has religious instruction. Mrs. Baker doesn’t like Holling—he’s sure of it. Why else would she make him read the plays of William Shakespeare outside class? But everyone has bigger things to worry about, like Vietnam. His father wants Holling and his sister to be on their best behavior: the success of his business depends on it. But how can Holling stay out of trouble when he has so much to contend with? A bully demanding cream puffs; angry rats; and a baseball hero signing autographs the very same night Holling has to appear in a play in yellow tights! As fate sneaks up on him again and again, Holling finds Motivation—the Big M—in the most unexpected places and musters up the courage to embrace his destiny, in spite of himself.
Posted by Susie Boyce at 9:48 AM