I sat alone on the couch in the ICU waiting room, eyes red and swollen, waiting for family members who were still en route from out of town and out of state. Several distraught members of another family walked in and sat directly across from me. After realizing who they were, I did the only thing that a 19-year-old college sophomore could possibly manage in that situation: curled up on the couch, closed my eyes and pretended to sleep.Earlier that day, I had been at work when two of my roommates came looking for me. A vice president of our university had just knocked on our apartment door to personally deliver the news, which my friends in turn delivered to me.It wasn’t the kind of news one delivers over the phone.My grandparents (who lived nearby) had been involved in a devastating car accident resulting in my grandfather’s death and my grandmother’s life hanging in the balance. To make the situation infinitely worse, my grandfather had been driving and had struck a university student, causing multiple head injuries.That poor girl shared the ICU unit with my grandmother while I shared the waiting room with her family. Thankfully, the student eventually made a full recovery.A few weeks later, on the second Sunday in May, I held my dear grandmother’s hand as she took her last breath before passing over to the other side to join my grandfather. Mother’s Day will forever be linked to that defining moment for me.I vividly remember sitting in my grandparents' garage a few days later, trying to decide what to keep and what to give away. In the middle of this impossible task, I came across a meticulously typed booklet titled “THE STORY OF MY LIFE BY ECHO BERRY BOYCE.”It had never seemed important for me to read it. After all, I had known my grandmother all my life and had even lived with my grandparents during my freshman year of college. Why read her life story?It was because of all the things I didn’t know, and even more things I didn’t know enough about.Once I read about my grandmother’s life, there were so many questions I longed to ask. My heartache was that, just a few weeks prior, I would have been able to ask.I would have asked her about loss. Within the period of a few years, she lost her mother in childbirth and two siblings to the flu epidemic of 1918.I would have wanted to understand the conflicting emotions she must have felt being raised by step-grandparents from the time she was 10 years old — while her dad and stepmom lived out of state, eventually adopting three children of their own.I would have dug deeper into my grandmother’s professional life, especially after learning that she chose to become an obstetrics nurse because of these words her mother said shortly before her death, “I hope you will be a nurse when you grow up so you can learn to take care of yourself.”The details of her courtship and marriage in her early 30s would have been so fun to learn, and what it was like to become a mom at what was considered at the time to be quite an advanced age.I would have asked how she navigated the shock, pain, recovery and readjustment to losing her leg in a car accident at the age of 73.Those questions would have been just the beginning. Someday, I’ll ask them all.How I yearn to have possessed the foresight at age 19 to understand how remarkable my grandmother truly was. I had always loved her, yet I had never really known her. As grateful as I am for every moment I spent with her, I ache for the conversations we never had.I have since vowed to ask the questions, have the conversations, spend the time — do whatever it takes — so that my life story includes only one such heartache.Only one. 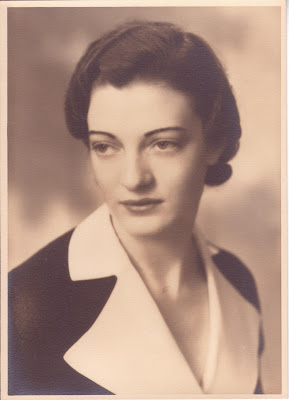 Email ThisBlogThis!Share to TwitterShare to FacebookShare to Pinterest
Labels: blasts from the past, in loving memory, mother's day, perspective, poignant, serious momsense column