My 6-year-old son answered a knock at the door to find a large wrapped box with my 16-year-old oldest daughter’s name on it. Inside, along with several bags of candy and the question "PROM?" that had been meticulously cut out in large letters, was a small box containing a single fortune cookie. The original fortune had been removed and replaced with a slip of paper that read, "Will you go to Prom with Tom?"And so it began.The most logical dress solution — for my daughter to wear the dress that she had just worn to her basketball banquet — was naturally out of the question (not for me, of course). So after much negotiation and some squabbling, we settled on a budget that my daughter insisted was absolutely, positively too low.A few days later, we set off to a large formal store. When I saw the prices, I had to find the nearest bench to recover from the shock. Incidentally, I joined a few dads who appeared to be either recovering from a similar shock or who had simply exceeded their prom dress shopping limit. Quite possibly both.It was clear that our predetermined budget would buy exactly one square inch of a dress from that store, but since we had driven 40 minutes to get there, I let my daughter try on a few dresses. To her credit, she only chose dresses from the clearance rack.Luckily the dressing room offered chaise lounges in abundance, because another shock awaited me.As expected, high school girls were flitting in and out of dressing rooms, twirling in front of mirrors, asking if they looked fat. But what I didn't expect were the types of dresses the girls were trying on. Sleeveless styles have always been standard for formal wear, but dresses (this season at least) featured huge cut-outs in the backs that came all the way around to the front. And ultra-short skirts.Ultra-short may be understating things a bit.These dresses brought to mind what my fabulous grandma always comments whenever she sees a girl wearing an outfit that leaves little to the imagination, "Oh, that poor girl! She didn't have enough money for the rest of the fabric!"Except that money wasn't the issue in this particular dressing room. In fact, it seemed like the pricier the dress, the scantier the amount of fabric used to make it. Moms were ogling over their daughters, telling them how beautiful they looked. For the most part, these were girls whose body types were not in the least bit flattered by the kind of exposure these dresses offered.The mothers’ endorsements of these kinds of dresses seemed completely counterintuitive to me. I was curious to know if the moms had given serious thought as to what kind of message they were conveying to their daughters' dates by sending their precious daughters off to prom dressed like that.Linguistics scholars may disagree, but I wondered if the origin of the word “prom” had anything to do with the word “promiscuous.”Three stores and several hours later, we found the perfect dress. Since the price tag was absolutely, positively too high, my daughter agreed to pay half. We had to find fabric and add sleeves, but the length and other necessary coverage were already in place.The dress purchase was only the beginning, after which we had shoes and jewelry and a boutonniere and a hairstyle to figure out. This prom business is not for the faint-of-heart.The day arrived. I helped my daughter get ready. Tom’s mouth gaped open when he saw her and he simply said, “Wow!” We took a few dozen pictures. My husband gave Tom both the third degree and the evil eye, just for good measure.And finally, I watched our princess ride off into the sunset (well, it was nearing sunset) with her prince for the evening.Oh my heart!I cried just a little bit, hoping that Tom would treat my daughter like the princess she is and that her evening would be practically perfect.Tom, it turns out, was an absolute gentleman and funny to boot. Thanks to him (and his parents, who I’m sure had a lot to do with it), the prom bar for my daughter has officially been set high.Prom preparations were a bit pricey, time-consuming and sometimes downright stressful. In the end, though, it was all worth it.Call me old-fashioned, but I believe that every teenage girl deserves a fairy-tale evening. 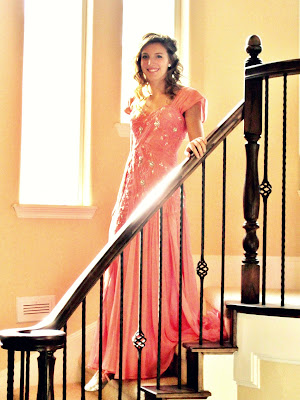