Two things by way of preface:  (1) I owe my daughter big time for letting me post her pic with this story, and (2) I have since changed to outdoor pictures with a professional photographer.

Expecting nothing but junk, I was surprised to find a picture of my daughter in the far back corner of my junk drawer. I put it in the middle of the kitchen island and waited in giddy anticipation for her to come home from middle school. And because my daughter’s best friend happened to be with her, the ensuing drama far exceeded my expectations.

As soon as they spotted the picture, both girls lunged for it. My daughter was a split-second behind her friend and proceeded to chase her through the house in what proved to be a futile retrieval attempt.

Knowing that her friend was intent on widely distributing the picture at school the next day, my daughter stomped back into the kitchen and demanded, “Why did you ever let me wear those clothes for a picture? I look awful. Seriously, Mom, what were you thinking?”

“Interesting you should ask, Sweetheart. Do you remember that day?”

The poor girl suffered from selective memory loss, so I helped out by reminding her.

Once a year, I drag my kids to the picture studio. Since the pictures are framed and displayed on the same wall, I figure that coordinating clothing should be the minimum requirement for pictures.

Until she got wind of the wardrobe plans. It was so horribly unfair, she asserted, that I always told her what to do and never ever let her make her own decisions. Plus the shirts were simply horrible.

I felt I had the right to tell her what to wear once a year for a picture. She took exception.

My other kids were already buckled in the car and we were ridiculously late for our appointment, so I finally laid down the law. I watched her pull on a golf shirt, angrily run a comb through her hair and fight back tears.

“Pick your battles,” I often remind myself. Coordinated wall photos were so worth fighting for. Plus I couldn’t back down, thereby showing my daughter that I’d give in if she threw a big enough fit.

Yet something told me to rethink my position. So I did, reluctantly.

I looked into my daughter’s beautiful eyes, swallowed some tears along with a chunk of home décor pride, and said, “You know what, sweetie? It doesn’t matter. You can wear whatever you want. I’ll be in the car with the other kids, so please hurry.”

A few minutes later, my daughter climbed into the car wearing boy jeans and a black long-sleeved running shirt. She wore a huge smile in the pictures, the black standing out in marked contrast amongst all that pastel.

Once her memory had sufficiently been jogged, my daughter was at a complete loss for words. She smiled sheepishly at me and apologized for being a brat.

She got it, irony and all.

Of course that didn’t stop her from begging her friend to cough up the picture in exchange for a snack. Fortunately for my daughter, her friend was hungry enough to take the bribe. The awful picture would never see the inside of their middle school.

To me, though, the picture is anything but awful. It reminds me that digging in my heels as a mom doesn’t always produce optimal results. In this case, stepping aside produced a picture that is perfect in every important way.

I wouldn’t trade that black T-shirt picture for a picture of my daughter wearing a pastel golf shirt. Not in a million years, not even for a million bucks. 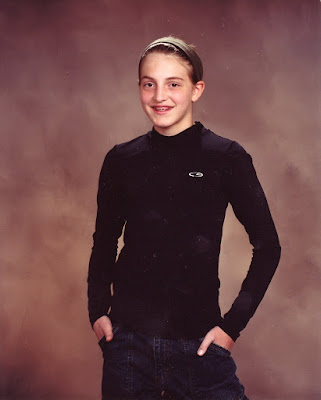