The best worst vacation ever

Published for Motherhood Matters on KSL.com (click HERE for the link)
My eyes flew open to an awful burning smell. Minutes earlier, I had handed over the driver’s seat to my 15-year-old daughter fresh out of driver’s ed and closed my eyes for a second.

My five kids, one nephew and I had headed out six hours earlier on a 21-hour road trip. My husband planned on joining us nine days into our two-week trip booked to capacity with visits and a reunion.

My daughter said, “Mom, something’s wrong. I’m pushing down on the accelerator but the van’s losing power.”

Smoke was pouring out from under our van. Over the phone, my husband asked me to open the hood and give a report. Um, lots of liquid under the battery, I thought. I couldn’t tell what color. I was loads of help.

Since the van shook every time a semi lumbered by, I didn’t think it prudent to let the kids out. So we opened the windows to get some relief from the 102-degree heat. Several flies took up residence in our van. Kids goofed around, someone got kicked, two kids cried, I tried not to.

Our situation was less than ideal.

After a bazillion hours, a shuttle van arrived. Weird that the clock said only two hours had passed.

We were driven 30 miles back to Amarillo, Texas, where we dumped our belongings at the service station and were whisked off to a McDonald’s to wait for the van to be towed to the station.

I was no expert but knew that the transmission had been rebuilt and the timing belt replaced three months prior — at great expense — so it definitely wasn’t those. Beyond that, I was at a complete loss.

Three hours and six dozen Happy Meals and ice cream cones later, a grim-faced mechanic sat down across from me in the small service station waiting room and delivered two pieces of unfortunate news.

Number one, our transmission was shot.

Number two, they would be closing in 10 minutes.

I missed the part during parenthood training where they explain what to do if you are ever stranded at a motel in Amarillo — sans car or husband — with six dreadfully unhappy kids.

While the kids splashed out excess energy in the pool, the motel manager suggested what turned out to be the perfect solution.

I called the friendly folks at "Big Texan," who sent a white limo complete with real longhorns as the hood ornament to drive us there in style. We were even lucky enough to watch a tall and remarkably skinny bearded man attempt to eat a 72-ounce steak dinner in an hour so he could get it for free.

Great food and high adventure, all wrapped up into one package.

Our van was delivered 24 hours later, and the service station owner, who had spent the past 12 hours working on the van, helped me load kids and bags back in. Having been stranded once, I was hesitant to continue on with the trip.

He then looked at me with concern and asked, “Do you have a towing service like AAA in case you should need it?”

His question did nothing to inspire confidence, but it did help me decide what to do.

We sent several prayers heavenwards and drove the six very long hours back home to a mechanic who had a vested interest in making the van roadworthy for us.

The term "staycation" took on an entirely new meaning.

My 10-year-old son described our trip with the irony it rightly deserved by declaring, “That was the best worst vacation ever!” 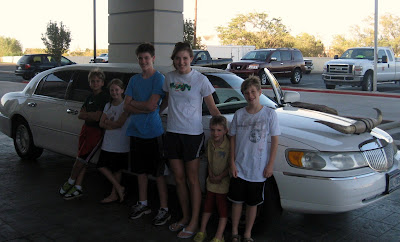 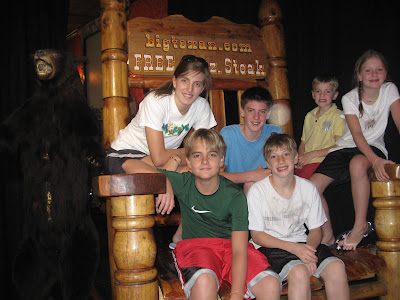