In Loving Memory of Lawrence Angerbauer 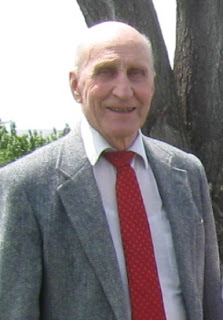 My father-in-law, Lawrence Goring Angerbauer, passed away last night in his home.  He was 90 years old.  The following is my inadequate yet sincere attempt to pay tribute to this remarkable man.

At the age of forty-four, when most fathers are sending their kids off to proms or footing the bill for college expenses, my father-in-law Lawrence was married for the first time to his sweetheart Merilyn Tew.  Having waited patiently many years to find each other, they deeply appreciated their new-found happiness.  I often heard him say, “With Merilyn, it was worth the wait!”  Six children followed in rapid succession: four sons (number four being my husband Jeff), a daughter, and then one more son.
Being an involved father to six children is no easy task; when that job begins at age forty-five, the job could seem overwhelming.  But Lawrence was up to the challenge.  He had served a two-year mission for the Mormon church, earned a Purple Heart in World War II, and was a successful real estate developer. Lawrence fast learned that these experiences were mere stepping stones to his most significant job of all:  Fatherhood.  It was the role of a lifetime, and he filled it with pride.
Idleness was not a part of his vocabulary, and Lawrence did all he could to ensure that his children learned the value of hard work, both physical and intellectual.  Each child had his or her own jobs in their extensive garden and his or her own spot at the family’s homework table in the library.  He would wait up at that table reading a book by lamplight until every teenage child had returned home safely.  Annoying as this seemed, the children now recognize and appreciate it as an act of sacrifice and love.
Jeff describes a childhood filled with delightful memories. The family made frequent car trips to Southern California, Yellowstone, Southern Utah, and the beautiful nearby canyons.  An extensive slide collection tells stories of camping, hiking, biking, boogie-boarding, and sight-seeing.
While raising his family, Lawrence followed in his father’s career footsteps and became a valuable employee of the United States Postal Service.  Retirement, however, presented Lawrence with an unusual dilemma:   all six of his children were still at home, necessitating further employment. So at the age of 60, when most men begin scheduling more tee times and vacations, Lawrence began the arduous task of finding a job - without the benefit of a college degree.
One humbling rejection followed another, until at length he was hired by the Mormon Church to be the custodian of a nearby meetinghouse.  Putting aside his pride, he took great satisfaction in his new employment.  There was not a meetinghouse anywhere that could equal his in landscaping or cleanliness.  The parishioners were appreciative of and grateful for the building’s meticulous care.
Lawrence’s biggest trial, however, was still to come.  In 1985, his beloved Merilyn was diagnosed with bone cancer.  The next five years were filled with surgeries, hospital stays, chemotherapy, and eventually the amputation of Merilyn’s right leg.  It was a difficult time.  His children were in junior high, high school, college, and serving missions for the Mormon Church.  Lawrence met these many challenges with characteristic dignity, perseverance and an abiding faith in God.
Merilyn lost her battle to cancer on December 15, 1990, leaving Lawrence to continue his watchful and diligent care over their family.  The family has since grown to include 28 grandchildren, whom he treasured and adored.
Lawrence “officially” retired at the age of 75, but unofficially he worked in his garden, workshop, and kitchen until the end.   And there was always a book sitting on the table beside the lamp, waiting to be read.
When I feel tired or overwhelmed by life, I think of my father-in-law’s pattern of showing courage, perseverance and faith in the face of severe challenges.  His example inspires me to face my own difficulties with greater determination.  And when my kids face their own hardships, I’m grateful that they have their grandfather’s example to inspire them to never lose faith.
Lawrence’s absence will be felt deeply in our family.  After 20 years of being separated from his beloved Merilyn, I can only imagine their joyful reunion. He has returned home.  I am confident that Lawrence and Merilyn will continue their watchful and loving care over their family from the other side.
Lawrence would often say that he lived an unremarkable life.  I beg to differ.
Lawrence had incredible strength, determination, hard work, dignity, faith.  We love, honor, and will always remember this remarkable man.

Email ThisBlogThis!Share to TwitterShare to FacebookShare to Pinterest
Labels: in loving memory, poignant