A month ago, I took Kirsten to the dermatologist due to an enormously hideous and painful wart on the bottom of her foot.  As I suspected, the doctor said it needed to be frozen off.  Translation, of course, is burned off.  It's so cold, it burns.

"This might hurt, a large blister will form, and you'll have to come back in a month - after the blister has healed  - and we'll see if anything is left of the wart."

With little ceremony, the doctor proceeded to freeze the wart.  Over and over and over.  Kirsten - one of the toughest kids I know - started shaking with pain but held it together.  She even held it together as we walked towards the check-out desk.  But as I was paying, she turned white as a sheet, doubled over, almost fainted, and barely made it to the car.  She was in severe pain for several days.  As a family, we watched the blister with horrified fascination for the next few weeks.

Fast forward a month to her follow-up appointment.  We walked into the office and were greeted by a different assistant than the one we had previously seen.  She asked a few questions and looked at Kirsten's foot  - the blister had healed but it was clear that the wart hadn't completely disappeared.

In a deep Texas drawl and with all the concern of a mother hen, the assistant then said,  "He is very aggressive with the freezing.  That must have hurt like [pause as she searched for a word other than "hell"] cock-a-doodle-doo!"

Did I just hear that right?  By the expression on Kirsten's face, it appeared that I did.  We restrained ourselves and didn't laugh until after she exited the room.

The doctor recommended either (1) one more freezing or (2) a month's worth of topical treatments.

I couldn't believe my ears when Kirsten opted for the freezing.  She figured she'd rather get it over with in one shot and not have it drag out forever.

As expected, it was considerably painful.

Kirsten (9th grade) came home from school recently and said, “I hate it here.  I want to move back to Utah.”
I understand that the translation of her statement was probably something like, “Today pretty much sucked.”  I know that about teenage girls.  But, being her mom, I still wanted to wave a Magic Wand and make it all better.
I thought of a Magic Wand – of sorts.  So, I made arrangements for the boys to play at the Egans, packed an overnight bag, loaded up on snack food, checked Emma and Kirsten out of school, and we headed three and a half hours north to Deer Creek High School in Edmund, Oklahoma.  Kirsten’s cousin Alex, a senior in high school, was on the Football Homecoming Court that night.  Her 6-yr-old triplet sisters had been asked to be the attendants.  How cute is that?
It was a beautiful October night.   Alex and the other members of the court were escorted into the stadium, the triplets walked in carrying the crown on a pillow, Alex’s name was announced as the winner, the crown was placed on her head.  Cheers and clapping, hugs and pictures.  Friday night lights in all of its glory.
And we missed the entire thing.
The details are still so painful. Let’s just say I am directionally challenged in the first place, don’t own a GPS, relied on sketchy verbal directions instead of printing out a map, and was unable to reach the people via cell phone who would have been able to steer me back on course. I felt like a complete idiot. And lots of other things too - none of which are at all appropriate to type in this family-friendly post.
What in the name of all that is holy happened?  Magic wands are ridiculous (Kirsten’s favorite word). I fumed while wiping away angry tears. As I saw it, the entire evening was a disaster.  In fact, it pretty much sucked (Kirsten’s favorite phrase).
Hindsight, in its usual helpful form, has since given me some perspective.
I can’t think of the last time I had seven uninterrupted hours to talk with Kirsten. Seven is actually a slight exaggeration.  After her favorite radio stations faded out and she realized I hadn’t packed her Ipod (oops, my bad!), Kirsten talked to me.  No matter how much I wave a magic wand at home, this kind of conversation rarely happens.
Kirsten saw her cousin in her Homecoming dress - a dress that, shall we say, covered much more skin than the other dresses on the field.  She heard the stories of how the boys on the football team like and respect Alex – they respect the fact that she has maintained high ethical and moral standards throughout high school.  And she’s super cool and fun. This is why she was elected Homecoming Queen.   A more powerful lesson for Kirsten than any I could give her at home with hypothetical scenarios.
I still don’t know why we didn’t make it.  Maybe we would have gotten in an accident.  Maybe Kirsten needed to see that I don’t cuss when under extreme duress – but I do cry and rant, just the tiniest bit.  Maybe I needed to be humbled.  Okay, for sure I needed to be humbled.  I’ve given up trying to figure it out.
But this I do know.  Magic wands are tricky - they don’t always work how or when we want them to.  But this Magic Wand came through for me - the trip didn’t suck after all.
All of this being said, there will most definitely be a Magic Wand at the top of my Christmas list.  It’s called a GPS. 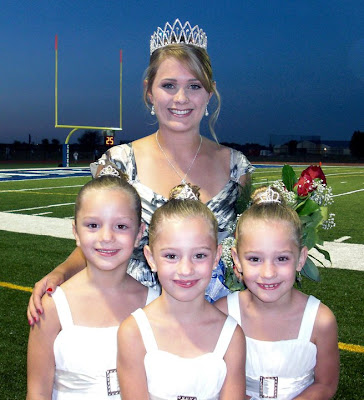