I know a thing or two about Flying Under the Radar in gym classes.
In Spinning, no one knows how much resistance I have on my bike, so when I'm about to fall completely off the bike - but would prefer not to - I simply cut down the resistance and spin my legs like crazy.  In the semi-darkness.
In Power Pilates, I arrive early to claim the far back corner spot.  When the ab work goes on and on and on and my abs simply won't, I pretend to finish the set, fairly confident in the knowledge that everyone else is looking at the instructor or the ceiling, not at me.  Without mirrors in the room, I don't even have to look at me.
So when I read the following description of a step class I was interested in trying, nothing about it sent off any red flags.  Not one single thing.
STEP/INTERVAL
Step it up!  By varying intensity levels with intervals you'll use the large muscles in the legs to burn fat and calories.  Using hand weights for added resistance, you'll also build and strengthen your upper body!  Great all around workout!
I walked into the class, set up my step in the back row, and commenced what was to be the single most humiliating hour of my life.
Red flag number one was the instructor asking if there was anyone new to class.  I raised my hand half-way, relieved when she didn't see it.  Why call unnecessary attention to myself?
Red flag number two, her next comment: "Not that we don't like the newbies, but . . . " voice trailing off.  Knowing nods and smiles from class participants.  I smiled too, knowing I could always use my Under-the-Radar Strategy in a pinch.
Somewhere between the initial Hit me with your best shot and the last Fire Awayyyyy! of the very first song, I had the A-HA moment that completely took the spring out of my step:

Step/Interval, by its very design, makes it categorically impossible to Fly Under the Radar.
You see, I had run into a few complications.


The first was understanding the instructor. At all.  With precision very much like an expert Square Dance Caller, she started yelling.  Not specific instructions - just words and phrases.  Around the World. Corner to Corner. Grapevine. Helicopter. Mambo Cha-Cha-Cha.  I took them to be names of steps I was supposed to be performing, but that's where all comprehension ceased.
The second was actually performing those steps.  As luck would have it, I was surrounded by Experienced Steppers who appeared to have mastered Stepping right along with Riding a Tricycle. Surely I could follow them.  It wasn't the steps so much as the tempo that proved troublesome.  By the time I had observed and completed one simple turn, the Steppers had all gone on to perform two hops, three kicks, and four twirls - I swear a few of them flipped once or twice -  before returning to starting position.  Where I still was.
The third was the mirrors.  Picture yourself being in the audience watching a dance recital, the dancers moving together in perfect harmony - as if extensions of the same mind - until one of them gets out of sync.  It jolts you out of your revere, you feel compelled almost against your will to watch that dancer exclusively from that point on.  With a sympathetic tongue click or two, you wonder why that dancer didn't just sit this one out. Poor Thing.
Now picture yourself as that Poor Thing, only this particular dance lasts for sixty excruciating minutes.
My only respite was when we did intervals on the mat.  I was never so excited to do sit-ups and push-ups and lunges in all my life.  But the intervals would inevitably end too soon, leaving ample time for more humiliation.
Despite my best efforts to high-tail it out of there the minute class ended, I was caught in a bottleneck at the door.  I looked straight ahead, avoiding any eye contact, especially with the Stepper be-bopping her way towards me with a huge smile on her face.  I was trapped.
"You did a good job today.  You really did."
I had seen dozens of Steppers who had done good jobs that day.  Astoundingly good jobs. Why didn't this lady tell any of them how great they did? This sweet woman's well-intentioned comment confirmed what I already knew:  Under the bright, observant eyes of everyone in the class, my Stepping Debut had been a Disaster.  Mercifully, Pat Benatar and the Bee Gees had drowned out the sounds of sympathetic tongue clicking.
Stepping isn't my strong suit.  But I do dabble in writing, so I decided to help out my gym by re-writing the class description to reflect a slightly more realistic representation of the class.
STEP/INTERVAL
Prerequisites:  B.A. in Stepping from an Accredited University, Coordination, Natural Rhythm, Ability to Smile for an Hour and Never Break a Sweat, Lightning-Fast Reflexes. If you meet all of these requirements, then by all means, Come Step It Up With Us!  It's a great all around workout!
I even found a picture to go along with the class description.  Hopefully the gym will appreciate my efforts. 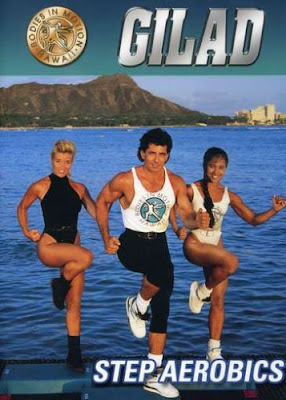