A look of panic passed between my brother and his wife.  They stood up, donned their coats, and drove off into the cold night at 9:30 PM on Christmas Eve.  We all looked on in amusement, knowing exactly what had happened.
My mother raised eight children on a school teacher's salary.  Her posterity has since increased exponentially, whereas money coming in the door has remained relatively constant.  Simple math dictated that she think outside the "purchasing dozens of brand-new gifts each year" box.  Therefore, her garage sale bargaining skills have become masterfully honed.
Mom had landed the doll house deal of the century for my niece, but hadn't thought to notify Santa, who had landed a much more expensive deal on the same doll house - for the same niece.  Therein lay my brother and sister-in-law's dilemma, which couldn't be resolved at 9:30 PM on Christmas Eve.  My niece thus became the delighted recipient of two doll houses, gladly agreeing to share with her two sisters.
Gifts purchased in stores and online by loving grandmothers everywhere can rarely hold a candle to my mom's one-of-a-kind, unique, quirky - sometimes even way out there - gifts.
My husband once opened a set of meat carving knives nestled in their own fabric-lined leather case.  He can now carve a turkey with upmost panache - a claim the neighbors simply cannot make. 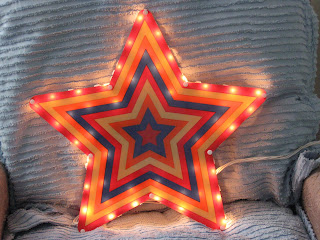 For his twelfth birthday, my son became the proud owner of a Disco Star - plastic, rainbow-striped, with multi-colored lights flashing in various patterns - perfect for all the dance parties he is sure to host in upcoming years.  None of his friends can boast owning anything remotely like it.
My teenage daughter received what looked like a travel alarm clock.  We watched in fascination as the contraption unfolded with robotic precision, revealing a clock face that displayed the times in New York, Paris, and Hong Kong.  Not finding the gift  relevant to her middle-school existence, my daughter bequeathed it to our four-year-old, who uses it as a laptop.
A plethora of fabulous books, games, and toys have been unveiled and enjoyed over the years.  Admittedly, there are intermittent duds.  Cases in point are a remote-control helicopter that never worked and the occasional missing piece that is crucial to a toy's operation.
So ingrained is the previously-owned gift expectation, that when my nine-year-old once opened a still-shrink-wrapped Christmas gift from grandma, he declared in amazement, "It's NEW!"  I checked with Mom - she laughed and confessed that people occasionally unload items at garage sales that have never been opened. 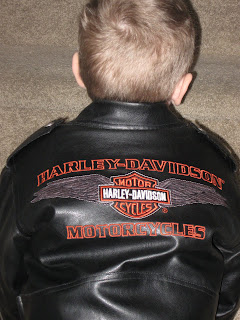 A genuine leather Harley-Davidson biker's jacket is the all-time bomb of garage sale finds.  Originally a Halloween costume, it is my four-year-old son's current favorite jacket.  Because it's the genuine article, people naturally assume that I'm grooming him to be a biker dude someday.  Wearing it in public garners countless comments.
A couple in their 60's recently weighed in.  The woman commented on its awesomeness, and the man - who looked very much like he rode a Harley himself - said to me, "You're teaching him the right priorities - from the start!"
Although I suspect he was advocating entirely different priorities, that man was absolutely right. New isn't necessarily better. Think outside the box. Make do with what you have.  Be generous.  Be happy.
Kudos to Mom for teaching my kids the right priorities - from the start.   We look forward with giddy anticipation to opening the next gift.
Posted by Susie Boyce at 2:54 PM

Email ThisBlogThis!Share to TwitterShare to FacebookShare to Pinterest
Labels: blasts from the past