Shortened version of this story published in Wasatch Woman Magazine, December 2010
(click HERE for the link)

I watched my dad open the box on his dresser, looking for the fingernail clippers I had asked to borrow.  It had been strange, his reaction to my request.  He had hesitated - longer than I thought such a simple request warranted - and had agreed only under the condition that the clippers would never leave his sight.  This behavior was out of character for my mild-mannered Dad; I should have heeded the big red flag he was waving and left the room immediately.  But instead, I stayed to observe my dad's temporary undoing. Discovering that the clippers were not in the box, Dad  proceeded to twitch, rant, rave, fume, gesture - and even utter strange noises.
Dad had officially fallen off his rocker.
Over a pair of nail clippers?  Give me a break. So juvenile.  So ridiculous.  So unnecessary.  I was twelve, and determined then and there that my children would never be subjected to such displays of parental lunacy.  Ever.
It began subtly, the disappearance of everyday household items.  Scissors.  Tape.  Pens and pencils.   At first, I attributed it to the onset of senility brought on by having five children in rapid succession.  But when the misplaced items were recovered in places such as kids bedrooms and backpacks, my suspicions shifted towards my children.  I forced myself to face the ugly truth that my kids were less than perfect.  Deviant, even.
Like any concerned parent, I took action.  Lovingly, I explained to my children why items needed to be returned to their rightful places after use.  The next week, an entire box of markers disappeared.  Sternly, I laid out the consequences should particular items not be found in their proper places. Soon afterwards, my daughter came in the house wielding a spoon and knife she had found partially buried under a tree in the backyard.  Menacingly, I attached even larger penalties to specific infractions.  A few weeks later, as I opened the hatch of my Suburban in the Target parking lot, something caught my eye.  It was one of our cordless phones, lying on the rear bumper.  How it hadn't fallen off in transit I'll never know.  Regrettably, that particular infraction hadn't been on the list I had presented to my kids.
I started to put items deemed most-likely-to-disappear in hard-to-access places.  Kids moved chairs, boxes -  whatever it took - and accessed them.  I hid things.  The kids organized search parties until all lost items were safely recovered.  I refused to replace things such as Scotch tape - we actually went without it for quite a while until my pride got in the way.  It became a little embarrassing to send kids to birthday parties bearing gifts adorned with wrapping paper and packing tape.  I even offered duplicates.  My teenage daughter received both a hair dryer and straightener for Christmas, so I was puzzled when mine went missing again so quickly.  Turns out I hadn't figured quality into the equation.  If the replacements aren't of equal or greater value to the original items, they are of no practical use to the recipients.
My patience officially disappeared along with my makeup, leaving me desperate for a workable solution.  My daughter's upcoming fourteenth birthday provided me with what would surely solve the problem once and for all.   My Mary-Kay-Consutant-Sister-in-Law could help with the perfect gift - cosmetics infinitely superior to mine.  Blissfully, I watched as my daughter was transformed numerous times in front of the bathroom mirror, testing various makeup shades and application techniques.  Genius, I congratulated myself. 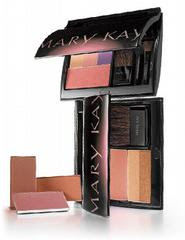 A week later,  my favorite eye shadow was not in its proper drawer.  Or any other drawer in the bathroom. Or in my closet.  Or purse. Twitching, I stepped into the hallway, walking in a trance towards my oldest daughter's room.  I began to rant, rave, fume, guesture, and - yes - even utter strange noises.
I had officially come undone.

Even in my altered state, I remained lucid enough to notice my children's wide eyes as they cautiously peeked out their bedroom doors.   I was suddenly twelve years old again, watching my own dad's unhinging.  Feeling utterly sheepish, I had two startling realizations.
One, I finally understood my dad's nail clipper episode.
Two, I knew exactly what my children were thinking.
Posted by Susie Boyce at 8:25 AM