Host Seth Part I:  The Curious Bumps
Seth shows Mom a curious patch of bumps on his stomach.  After determining that they don't hurt, Mom ignores the problem until she guilts herself into taking Seth to the doctor.  Diagnosis: Warts.  Cure: "Beetle Juice," carefully dabbed on every wart with the warning that it will cause blisters, which may be somewhat uncomfortable come nightfall.  Turns out "somewhat uncomfortable" actually means "tortuously painful."  Seth, through his sobs, exclaims, "I wish I'd NEVER gone to the doctor!"  One month later, a few scabs left, Seth prays fervently that the warts never return.  If they do, the only way Mom will ever get Seth back in for more Beetle Juice is if he's rendered completely unconsious.

Host Seth Part II:  The Curious Lump
In the garage one day, Seth tries to take a small stick away from Caleb, who defends his position by whacking Seth on the head.  Seth's crying is a little out of proportion to the minor blow he has just received, so Dad looks more closely at Seth's forehead and discovers that the skin has broken over a curious lump of unknown origin.  Caleb did not cause this lump, so Dad brings Seth into the bathroom and proceeds to perform investigative surgery - with Tweezers.  Dad discovers a foreign object embedded in Seth's forehead.  The skin has grown over it, and Seth's body is in the process of absorbing the object right into his head.  Dad pulls, twists, struggles, and eventually wins, extracting a chunk of wood about the size of a large tooth - root and all - out of Seth's forehead.

Host Seth Part III:  The Curious Conspiracy
Thanks to Beetle Juice, Tweezers, and Mom and Dad's Astute Mental Prowess, the entire Human Race avoids Certain Destruction.  Having not been born yesterday, Mom and Dad are fooled by the Warts and Wood Chunk not at all.  They recognize the old Alien-Brain-Disguised-as-Warts-and-When-That-Doesn't-Work-a-Wood-Chunk-Implanting-Itself-into-a-Superior-Human-Host-so-Its-Species-Can-Take-Over-the-World Trick when they see it.

The Aliens clearly don't research their victims well.  They have no idea who they're messing with.

Bring it on, Aliens.  Mom, Dad, and Superior Human Host Seth are ready for your next move - whatever that may be.
Posted by Susie Boyce at 8:51 PM 3 comments

The first words that come out of the kids' mouths when they come home from school usually represent the most important/most traumatic/most exciting thing that happened to them that day. So I try to listen carefully and show whatever type of empathy the situation requires. Try is the key word.

This past week I heard something new. Emma, as she plopped herself into the van when I picked her up from 1st grade, with a high degree of emotion, declared,

"I had SERIOUS, SERIOUS problems with the glue bottle today! First it squirted out too much, then I got too little. It was a MAJOR problem!"

I said what I could to show empathy while mentally rolling my eyes at the drama of it all.

When we got home, I looked closely at Emma's face. Both her chin and her cheek had large patches of dried glue on them - the kind that you can peel off like a second skin.

Emma had not been exaggerating (much). Apparently, that glue bottle had given her some serious, serious problems.
Posted by Susie Boyce at 5:14 PM 0 comments

In a futile attempt to de-clutter a junk drawer near our computer, I pulled out a picture from far in the back and laughed until I cried.  Eagerly, I placed the picture in a conspicuous spot on the kitchen counter and waited in anticipation.  High drama would in all likelihood occur as soon as my daughter walked in the front door after a long day at junior high school.  I was not disappointed.
When I saw my daughter’s best friend come into the kitchen with her, I couldn’t believe my luck; I could not have orchestrated a more perfect scenario!  My daughter’s friend saw the picture first and was a split second faster than her.  She grabbed the picture and dashed through the house, desperately trying to keep it away from my daughter, who was clearly bent on its immediate destruction.  Her friend prevailed.  Defeated and distraught with the prospect of the picture being circulated at school the next day, my daughter stomped into the kitchen ready for a fight.  “Mom,” she demanded, “Why did you ever let me take that picture?  How could you have let me wear those clothes?  My hair looked awful!  I’m so embarrassed!  Why would a mom DO such a thing?!” Since she was a highly-emotional thirteen-year-old, I thought it wise to let her vent for a few minutes and eat a snack as she decompressed.  Then I cautiously took her for a walk down memory lane.
Once a year, I drag my kids to the picture studio for individual and group pictures.  Since all of the pictures are displayed on the same wall, I naturally prefer that they wear coordinating outfits.  I try to keep things simple, so when my daughter was eleven years old, I had decided that each child would wear a different pastel-colored golf shirt.  It seemed easy enough, and since she was insistent on making her own choices, I was relieved that my daughter had two different shirts from which to choose.  My relief was short-lived.  She regarded those shirts with upmost disdain, adamantly refusing to wear either one of them.  I was determined otherwise, and a heated argument ensued.  The discussion soon morphed into her accusing me of numerous injustices I had allegedly committed against her, most of which revolved around me always telling her what to do and never letting her decide for herself.  It got ugly.  I felt I had the right to tell her what to wear once a year for a picture.  She took exception. 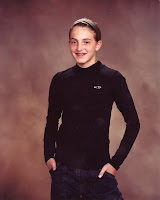 Half an hour later, I had won the hard-fought battle and was waiting in the car with the rest of my children for Her Highness to arrive, ridiculously late for our scheduled appointment.  I was emotionally exhausted and close to tears when I had an epiphany:  Yes, I had won the battle, but what about the war?  In the long run, my relationship with my daughter was infinitely more important than a picture that would hang on the wall for a year at most.  Fully understanding that our relationship should be top priority, my first instinct was still to hold my ground.  Hadn’t I fought a good fight and emerged victorious?  A perfectly pastel picture was firmly within my grasp!  Reluctantly acknowledging that pride had no place in this situation, I felt a weight lift off of my heart as my golf shirt clad daughter stomped into the car, slammed the door, and I was able to say to her, “Sweetheart, it doesn’t matter what you wear.  Go ahead and change into whatever you want for the picture.  I’ll wait.”  Speechless, she stared at me for several seconds and then asked, “Are you serious?”  I assured her that I was.  Five minutes later, she reemerged wearing boy jeans, a black long-sleeved sport shirt, hair slicked back into a ponytail, bangs held back with a black knit headband - and a smile.  We took the pictures and I hung them on the wall, where they remained for well over a year.
An hour after the picture-snatching incident, the two best friends came back into the kitchen for another round of snacks.   Intent on her own food preparation, my daughter seemed oblivious to her friend’s no-food status, so her friend eventually had to ask.  Still looking down at her own food, my daughter replied, “Sure, if I can have the picture back.”  Hunger overcame reason, and the picture was returned to its rightful owner – in exchange for a piece of toast.  What I’d love to do is hang that picture on the wall – or at least scrapbook it – but I’ve hit a roadblock.  The picture has mysteriously disappeared.

P.S. As you can see, I eventually found the picture.  Kirsten now laughs about this, or I promise you the picture would NOT be here.  I've invested too much in our relationship!
Posted by Susie Boyce at 12:29 PM 2 comments